Curasept is a unique mouthwash as it claims to treat and prevent a range of gum conditions while at the same time avoiding common side effects of mouthwash containing chlorhexidine, such as staining teeth and impacting taste.

Out of the many mouthwashes I have tried for TheToothsayer (UK and US), Curasept is a standout product. It’s the one I am now using on an ongoing basis. Read on and see if it’s right for you.

If you suffer from sore gums or are vulnerable to gum infection, you may have tried products containing chlorhexidine. According to the British Dental Journal, chlorhexidine is the gold standard oral antiseptic for the treatment of gum disease.

However, dentists find that patients are reluctant to use products containing it because it stains and doesn’t tastes nice.

This is why Curasept is so revolutionary. It contains the best ingredient for dealing with sore and infected gums, without the side-effects.

Curasept mouthwash is a range, rather than a single product. This article focuses on the two most popular options:

The % indicates the volume of chlorhexidine and ADS stands for anti-discolouration system.

However, we will also be looking at

Curasept ADS 0.2% Implant which is the option I personally favour. This contains an additional ingredient that speeds up healing and it’s brilliant if you suffer from receding gums.

We will be taking a look at:

What is Curasept used for?

Curasept is used to treat a range of distressing oral conditions:

It also provides protection against reinfection as it continues to prevent attack by harmful bacteria, even after spitting out.

Curasept contains chlorhexidine which quickly kills harmful bacteria in the mouth. Chlorhexidine also ‘sticks’ to dental surfaces and continues to work even after the mouthwash has been spat out. This helps to control bacteria and prevent the development of plaque.

This is why chlorhexidine is the gold standard in dentistry, it’s fast, effective and its ‘stickiness’ means it’s a gift that keeps on giving!

But chlorhexidine products without ADS (anti-discolouration system) can stain teeth. This means people are reluctant to use them. Either at all, or for any length of time.

This is a problem. The key to successful treatment of gum infection is to maintain control of bacteria that cause plaque. If discolouration puts you off using an effective product, your condition will not improve and may worsen.

The action of chlorhexidine is boosted by the use of Xylitol, a natural sugar alcohol that inhibits plaque-causing bacteria

As well as this, Curasept is formulated not to interfere with taste and has a very mild flavour.

Lastly, as it is alcohol free so will not cause dryness or irritation in the mouth.

Is Curasept Mouthwash for me?

If you suffer from ulcers, sore or bleeding gums, gingivitis, have had recent oral surgery or braces you should most definitely consider using this mouthwash.

To make the right choice for you, it is important to read the pros and cons of each option as these differ, as do the instructions for usage. But in summary:

This option contains the lowest percentage of Chlorhexidine (0.05%) and also contains sodium fluoride.

Curasept 205 is designed to be used over the long term. It is the ‘maintenance’ version of the mouthwash. The concentration of Chlorhexidine is the lowest of the available rinses. It’s also the only version that also contains fluoride.

This option contains a higher concentration of chlorhexidine and is suitable for intensive use of up to two weeks, or as directed by a dentist. It can be used again after a one week break. It does not contain fluoride.

Curasept 220 is more of an ‘emergency’ version of the mouthwash. It’s suitable for severe or acute conditions or in preparation for surgery or chemo/radiotherapy treatments.

It is not suited to long term continuous use (of more than two weeks) unless otherwise indicated by your dentist.

If symptoms persist after two weeks, take a 7 day break and repeat the instructions above again. Always follow your dentist’s advice. 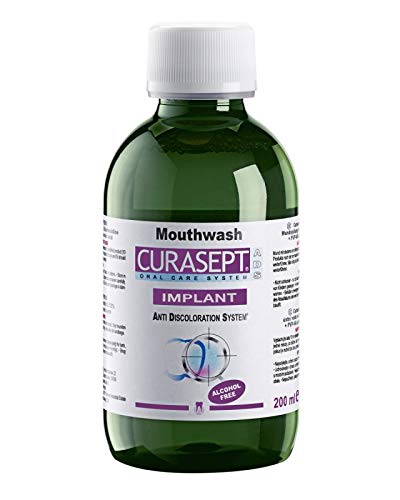 Curasept IMPLANT is my mouthwash of choice. It has all the benefits of other Curasept mouthwashes but also contains hyaluronic acid.

Hyaluronic acid is found naturally in body tissue to aid healing and repair. In Curasept Implant, Hyaluronic acid is combined with an ingredient called PVP-VA. Together they form a protective film over teeth and gums. This promotes healing, tissue regeneration and quickly relieves soreness.

If, like me, you have receding gums and are vulnerable to gum infection this is a fabulous product for short term use. It is also brilliant to prepare you for oral surgery and to speed up recovery. It is not suitable for long term use (unless under the direction of a dentist). However, you can take a 7 day break and then begin reusing the product.

How to use Curasept Implant 0.2%

If symptoms persist after 14 days, take a 7 day break and repeat the instructions above again. Always follow your dentist’s advice.

Curasept has been specifically engineered to reduce the side effects of its active ingredient, chlorhexidine, to an absolute minimum. These include tooth staining and taste loss.

The overwhelming number of users report no side effects. However, we each respond individually to different products so your reaction may be different. That said, numerous studies have shown that in the vast majority of cases, no taste loss or staining is experienced. From my own experience, I have had no side effects after using Curasept.

When using Curasept at higher doses (2%) it is recommended that you do not use the product for more than 14 days. You may take up using it again after a 7 day break. This is because chlorhexidine ‘sticks’ to dental surfaces so that it continues working. This is what makes it so effective at controlling bacteria. After 14 days, a build up of chlorhexidine may lead to some staining – even with the ADS system.

Hyaluronic acid and PVP-VA have no known undesirable side effects.

Where to buy Curasept Mouthwash

All three versions of Curasept Mouthwash are available on Amazon in single or multi packs.

Corsodyl is an excellent product which also contains chlorhexidine at 0.06%. This concentration is similar to Curasept ADS 0.05%, the ‘maintenance’ version of Curasept which is suitable for long term use. It is also less than half the price of Curasept.

However, Corsodyl does not have an anti discolouration system. This means it could stain your teeth. In addition, many users complain about the taste of Corsodyl as well as loss of taste after using it.

Basically, if you want all the benefits of chlorhexidine without the side effects – and are willing to pay a premium for this, Curasept is a product you should definitely consider.

Furthermore, if your symptoms are severe, you are recovering from oral surgery or preparing for chemo/radio therapy, Curasept 220 is likely to provide far more relief and protection for you than Corsodyl. And Curasept Implant has the additional benefit of hyaluronic acid which accelerates healing and tissue growth.

Curasept is an excellent product for anyone who experiences painful oral conditions, or who has had surgery or discomfort after orthodontic fittings. It makes use of the gold standard antibacterial ingredient, chlorhexidine, but is formulated not to stain teeth or affect taste.

It is clinically proven to be effective and highly rated by users on Amazon.

It safely controls the volume of bacteria in the mouth and it works, even after the rinse has been spat out. This has been demonstrated by randomised, double- and triple-blind studies.

This is a mouthwash with the full effects of chlorhexidine, but with greatly reduced side effects.

It is more expensive than regular mouthwashes, but it is also a superior product that provides maximum relief and protection from distressing oral health conditions, even acute and severe ones. And the Implant version promotes healing and tissue growth.

Lastly, I have tried all the mouthwashes I have reviewed and for me, Curasept is worth the investment.

We use cookies to ensure that we give you the best experience on our website. If you continue to use this site we will assume that you are happy with it.OkPrivacy policy